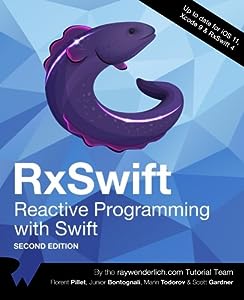 9781942878469
RxSwift: Reactive Programming with Swift,Second Edition
by: raywenderlich.com Team - Florent Pillet - Junior Bontognali - Marin Todorov - Scott Gardner
ISBN-10 书号： 194287846X
ISBN-13 书号： 9781942878469
Edition 版次： 2
Release Finelybook 出版日期： 2017-12-15
pages 页数： 446
Learn reactive programming in Swift with RxSwift!
The popularity of reactive programming continues to grow on an ever-increasing number of platforms and languages. Rx lets developers easily and quickly build apps with code that can be understood by other Rx developers — even over different platforms.
Not only will you learn how to use the RxSwift port to create complex reactive applications on iOS,you’ll also see how to easily solve common application design issues by using RxSwift. Finally,you’ll discover how to exercise full control over the library and leverage the full power of reactive programming in your apps.
This book is for iOS developers who already feel comfortable with iOS and Swift,and want to dive deep into development with RxSwift.
Topics Covered in RxSwift
Getting Started: Get an introduction to the reactive programming paradigm,learn the terminology involved and see how to begin using RxSwift in your projects.
Event Management: Learn how to handle asynchronous event sequences via two key concepts in Rx — Observables and Observers.
Being Selective: See how to work with various events using concepts such as filtering,transforming,combining,and time operators.
UI Development: RxSwift makes it easy to work with the UI of your apps using RxCocoa,which provides an integration of both UIKit and Cocoa.
Intermediate Topics: Level up your RxSwift knowledge with chapters on reactive networking,multi-threading,and error handling.
Advanced Topics: Round out your RxSwift education by learning about MVVM app architecture,scene-based navigation,and exposing data via services.
And much,much more!
By the end of this book,you’ll have hands-on experience solving common issues in a reactive paradigm — and you’ll be well on your way to coming up with your own Rx patterns and solutions!