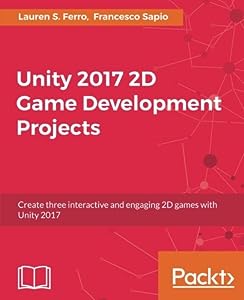 Unity 2017 2D Game Development Projects: Create three interactive and engaging 2D games with Unity 2017
Build classic arcade,shooter and platform games with Unity 2D toolset
2D games are everywhere! Timeless and popular,2D games represent a substantial segment of the games market. The Unity engine has revolutionized the gaming industry,by making it easier for game developers to create quality games on a budget. If you are looking for a guide to create 2D games using Unity 2017,look no further. With this book,you will learn all the essentials of 2D game development by creating three epic games in a step-by-step manner throughout the course of this book.
The first game will have you collecting as many cakes as possible. The second will transport you to outer space to traverse as far as possible while avoiding enemy spaceships. The last game will have you running and jumping across platforms to collect coins and other exotic items.
Throughout all these three games,you will create characters,make them move,and create some enemies. And then,of course,write code to destroy them!. After showing you the necessities of creating a game,this book will then help you to porting the game to a mobile platform,and provide a path to publish it on the stores.
By the end of this book,you will not only have created three complete great games,but be able to apply your knowledge to create and deploy your own games.
What You Will Learn
Work with Unity 2017’s new 2D workflow and create a 2D scene
Set the scene with different types of backgrounds,either static or dynamically using a tileset
Bring your character to life through simple animations
Understand the core concepts of programming by creating basic code that controls a character and destroys an enemy
Create buttons and game controls by using code snippets for input detection
Develop three 2D games from genres such as classic arcade,space shooter,and platformer games
Add audio and feedback and deploy your games