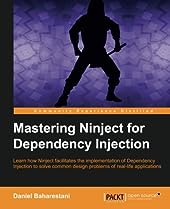 Dependency injection is an approach to creating loosely coupled applications. Maintainability, testability, and extensibility are just a few advantages of loose coupling. Ninject is a software library which automates almost everything that we need in order to implement a dependency injection pattern.
Mastering Ninject for Dependency Injection will teach you everything you need to know in order to implement dependency injection using Ninject in a real-life project. Not only does it teach you about Ninject core framework features that are essential for implementing dependency injection, but it also explores the power of Ninject’s most useful extensions and demonstrates how to apply them.
Mastering Ninject for Dependency Injection starts by introducing you to dependency injection and what it’s meant for with the help of sufficient examples.
Eventually, you’ll learn how to integrate Ninject into your practical project and how to use its basic features. Also, you will go through scenarios wherein advanced features of Ninject, such as Multi-binding, Contextual binding, providers, factories and so on, come into play. As you progress, Mastering Ninject for Dependency Injection will show you how to create a multilayer application that demonstrates the use of Ninject on different application types such as MVC, WPF, WCF, and so on. Finally, you will learn the benefits of using the powerful extensions of Ninject.

1: UNDERSTANDING DEPENDENCY INJECTION
2: GETTING STARTED WITH NINJECT
3: MEETING REAL-WORLD REQUIREMENTS
4: NINJECT IN ACTION
5: DOING MORE WITH EXTENSIONS
What You Will Learn
Understand dependency injection, how it is different from similar patterns such as inversion of control, and the problems that it addresses
Set up Ninject in an application and configure it either using XML or programmatically
Learn how to control object life-time by configuring object scopes
Wire up abstract service types to concrete implementations using bindings
Create plugins to add new features to compiled applications dynamically
Use Ninject in different application types such as Win Forms, Web Forms, WPF, Silverlight, ASP.NET MVC, and WCF
Inject common loggers such as log4net and NLog automatically into application components
Test application units and automate the injection of mock objects by integrating Ninject with common mock frameworks (for example Moq or Rhino Mock)
Register hundreds of bindings in a single line of code using the Convention configuration
Inject the implementation of cross-cutting concerns such as logging, exception handling, or caching by interception
Authors
Daniel Baharestani
Daniel Baharestani is an experienced IT professional living in Australia. He has over 10 years of professional experience in design and development of enterprise applications, mostly focused on Microsoft technologies and holds a B.Sc in software engineering. Daniel is currently working at 3P Learning, which is a global leader in online learning with its flagship platform, Mathletics—used by more than 4 million students worldwide. For further details you can visit his website at http://baharestani.com.
觉得文章有用就打赏一下文章作者
未经允许不得转载：finelybook » Mastering Ninject for Dependency Injection
分享到： 更多 (0)