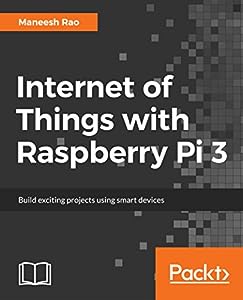 Book Description
This book is designed to introduce you to IoT and Raspberry Pi 3. It will help you create interesting projects,such as setting up a weather station and measuring temperature and humidity using sensors; it will also show you how to send sensor data to cloud for visualization in real-time. Then we shift our focus to leveraging IoT for accomplishing complex tasks,such as facial recognition using the Raspberry Pi camera module,AWS Rekognition,and the AWS S3 service. Furthermore,you will master security aspects by building a security surveillance system to protect your premises from intruders using Raspberry Pi,a camera,motion sensors,and AWS Cloud. We'll also create a real-world project by building a Wi-Fi – controlled robot car with Raspberry Pi using a motor driver circuit,DC motor,and a web application.
This book is a must-have as it provides a practical overview of IoT’s existing architectures,communication protocols,and security threats at the software and hardware levels—security being the most important aspect of IoT.
Contents
1: INTRODUCTION TO IOT
2: KNOW YOUR RASPBERRY PI
3: LET'S COMMUNICATE
4: WEATHER STATION
5: CONTROLLING THE PI
6: SECURITY SURVEILLANCE
7: IMAGE RECOGNITION
8: BOT BUILDING
9: SECURITY IN IOT
What You Will Learn
Understand the concept of IoT and get familiar with the features of Raspberry Pi
Learn to integrate sensors and actuators with the Raspberry Pi
Communicate with cloud and Raspberry using communication protocols such as HTTP and MQTT
Build DIY projects using Raspberry Pi,JavaScript/node.js and cloud (AWS)
Explore the best practices to ensure the security of your connected devices
Authors
Maneesh Rao
Maneesh Rao holds over 7 years of experience in software development,primarily in IoT. He has been a part of Thingworx IoT team. Thingworx is one of the most sought after IoT platforms. Furthermore,he has worked for one of the biggest consumer electronics company in India and developed IoT products for smart homes,smart factories,connected vehicles,and smart consumer appliances. He also assists start-ups in developing IoT products.